Berfboard 2.0 PSupply, a breadboard like protoboard with a power supply – Part 1

Berfboard was originally a prototype board that had designed to have connections similar to a breadboard but then I had an idea of combining a power supply into it. The power supply can provide +5V or +3.3V which would be ideal for certain Arduino or Raspberry Pi projects. Having a built-in power supply would make it much more convenient as you would just need a DC power adapter or a +9V battery to power everything up instead of adding additional wires for power and connecting it to an external power supply. 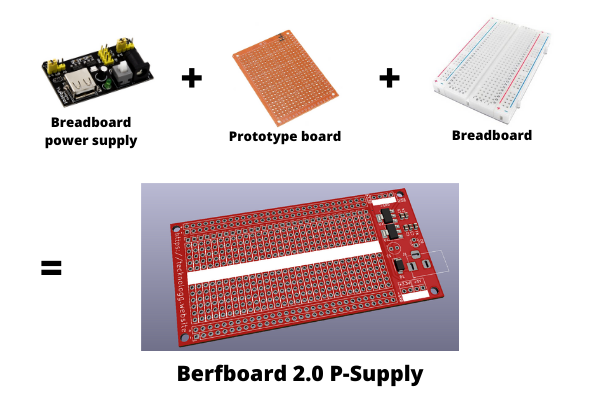 The circuit is actually fairly simple as you can see below. However, using a simple voltage regulator circuit has its limitations but it gets the job done. I will try adding a buck converter circuit in a later revision.

It took a while to do the PCB layout but eventually, I came up with this. I didn’t connect the power strips directly to the power rails, so you’re gonna have to solder a wire or something to connect it. The reason I did this was to give the user the choice between which voltage they would want to use when prototyping their circuit.

Want the board design files and schematic ? No worries it’s open hardware, you can get it from here https://github.com/Chromico/Berfboard-2.0-PSupply .

In Part 2 of this project, I’ll take a look at the final PCBs and Stencil kindly provided by PCBWay 🙂 and also assemble the boards.